It’s been a rough couple of years for the Tar Heels. It’s hard to say when the decline started, but it was probably the NCAA’s announcement of a formal investigation into Carolina athletics. It lasted a while, and while no official hammer ever dropped, the prospect of a toothless, heavily-sanctioned team precipitated the transfers of multiple players, at least a few of whom are now playing in the WNBA. Compound that with a brutal rash of injury luck, and you have nonexistent depth and less talent than you’d like at any position. Certainly there were highs sandwiched into the overall lackluster. The Duke OT win in January of 2018. Knocking off Notre Dame and ending NC State’s unbeaten streak in Reynolds last season. Ultimately, the state of the program was not quite where anyone wanted it to be. The whole thing obviously came to a head with Sylvia Hatchell’s abrupt and ugly departure.

Hatchell was Carolina women’s basketball. A Hall-Of-Famer, 1,000+ game winner, and national champion. Her career is summed up in the banners hanging in Carmichael. We will likely never know exactly what went down with her resignation. I loved Coach. I think every fan of this team did. But then all of that happened. Where Hatchell’s departure, and its alleged causes are concerned, I just want to say this: talking about women’s college basketball means talking about young women (already a marginalized group in society), who are a majority African American (double down on the marginalization), female athletes (add a massive factorial of bias they have to deal with), and people beholden to the hulking edifice of the NCAA. (Cap it all off with way more neglect and marginalization.) You are talking about a population with virtually zero power or agency staring into the face of a million reasons to keep their heads down and just play ball. If they raise their voices to tell you some bad sh*t went down, you should believe them.

And maybe all of that bled into all of the other problems and created something worse. And then some necessary changes happened. And then we’re here.

The season is young so far, but new head coach Courtney Banghart has things tilted in a different direction. 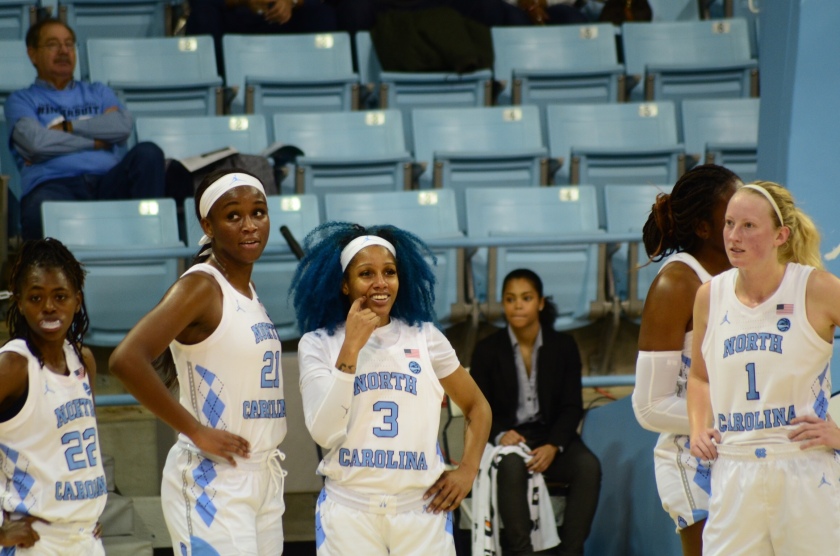 The first thing you notice is the joy. This team just feels like they love playing with and for each other. You can see it in three or four other players rushing over to pick up a teammate who hit the deck. You can see collective self-reinforcement and a we’ll get it next time comportment after a play didn’t quite work, as opposed to heads hanging low and glowering expressions. Somewhere, somehow, something in the ethos has shifted. There is a lightness to this team, a certain weightless jubilation, and it’s really quite something to see.

The vibe is good, but there are also notable tactical alterations. Banghart’s offense zips the ball around, relying on cuts and spacing. It’s not surprising for anyone who watched her brilliant Princeton teams, but it does make for a different dynamic than the dribble handoffs that initiated much of the offense previously. The operation is not perfect right now. The veterans on the team are adjusting to the new scheme, and the freshman are still figuring out how to play at this level, period. But it’s a start. One that has produced beautiful results so far, small sample size and non-ACC competition level aside.

On the other end of the floor, the defense is flying around. They are disciplined and tight and playing with fury. Five pairs of bent knees and arms spread out to cut off passing lanes on every possession. It all looks so different; so much more focused.

The whole overall effect is startling and dynamic and full of promise. Banghart has transformed this team.

Isostatic rebound is a geological term. It’s what happens when a glacier recedes from a patch of land and that land actually regains topographic elevation now that the weight of the ice is lifted. The burdens of unfathomably dense minerals and time have been removed, and the earth pushes back up towards a slightly higher plane.

It’s early. We don’t know what any of this is building towards. But every indicator so far says this is going to resonate and continue. From the bleachers in Carmichael, watching the new-look Tar Heels, you can almost feel your seat vibrate a little in sympathy. Like the whole barn, and everyone in it, is slowly but inexorably moving to higher ground. 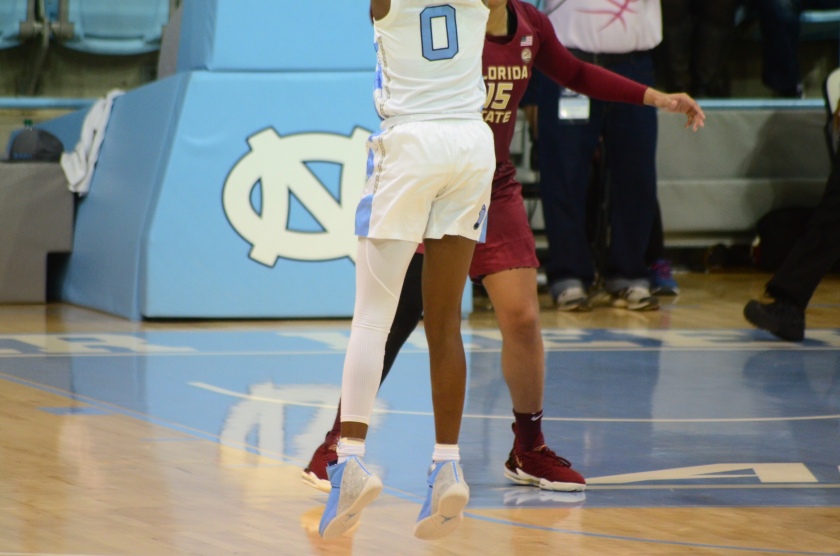 Dearly beloved, friends, neighbors, Tar Heels the world over: this is a website dedicated to the love, coverage, and celebration of all things UNC Women’s Basketball. This being our inaugural post, some introductions are in order.

My name is Travis. Most of the writing you read here will be mine. Basketball has been my favorite sport since I was old enough to know what sports were, and I’ve been in love with women’s hoops ever since I was fortunate enough to watch the 1996 Olympic Team live and in person when I was a teenager in Atlanta. I’ve written a general sports blog since 2011, and last season I covered the ACC for Women’s Hoops World. I’m a diehard Atlanta Dream fan, but I never had a D1 college rooting interest until I moved to Chapel Hill.

I moved here for my then-girlfriend, now-wife, Aggie. Aggie is pure genius with a camera and all of the photos you’ll see here will be her work. She grew up in a family of rabid Tar Heel fans (and is a third generation Heel herself), and carries an encyclopedic memory of all things Carolina athletics going back nearly four decades. She’s been shooting bands and sports for a long time, and her eye trains on angles and details that don’t so much capture the moment as put you on the stage or the field or the court. She can also eviscerate a ref from the stands more precisely and hilariously than any other human on earth.

Fun fact: the women’s basketball program at Carleton College, where Ags and I met (go Knights!), was literally founded by someone who played in the first game of basketball. Ever.

How this came to be: we’ve had season tickets since the 2014-15 season. In that time, we have lived and died with this team more completely than any of our other sports rooting interests. We talk about the players like they’re our friends. We’ve cried, we’ve screamed our throats raw, we’ve clocked what felt like whole lifetimes through roller-coaster games in Carmichael. And we wanted to share that passion and heartache and joy with anyone out there who cares to come along with us. In short, this site will be powered by love.

(Note: We meant to have this operation up and humming before the season tipped off, but my grandfather, the last living grandparent either of us had left, passed away shortly before that and things just … spiraled. But we’re here now.) 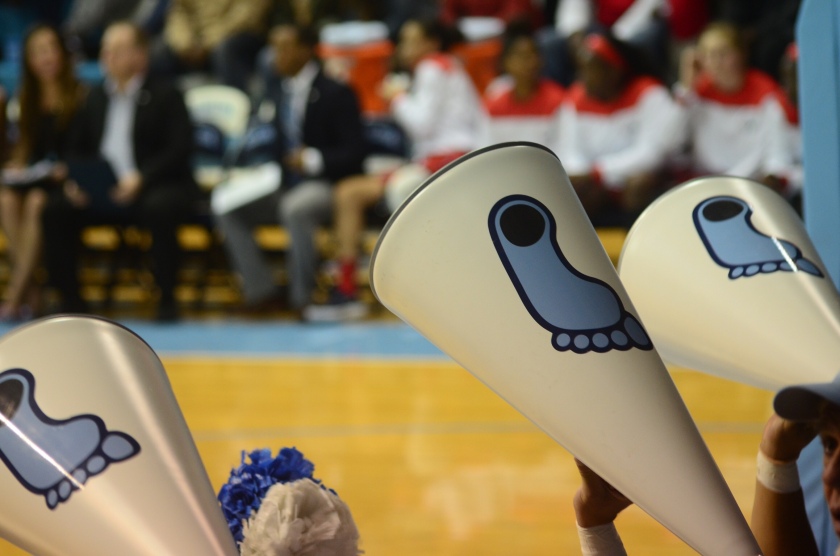 What we hope this will be: this is all something of an experiment. We’re going to try and replicate some of our favorite sports internet work here, and the things we gravitate to tend towards the eccentric. If you’re reading this, we assume you already read goheels.com for your previews and gamers and the like. There will be some of that here as well, along with analytics-based pieces (I am a huge nerd) and big-picture stuff about where the Heels are in the ACC and/or the national landscape. If we can wrangle it further down the line, hopefully some features on players, coaches, etc, as well. What we’re really after, though, is something in between Swish Appeal (if you like women’s basketball and don’t read them, you should fix that right now) and what Banner Society is for college football. A way to love this team and process the game that is broad, slightly silly, esoteric, and hopefully insightful and meaningful. We want to bring you good work, but also fun and irreverence. We want this project to amble off in unexpected directions from time to time. We’re going to take some big swings. We’ll probably screw a few of them up, but we beg your forgiveness in advance and hope you’ll stick around.

Welcome to Rally ‘Round The Well, y’all, cheer our Tar Heel teams like hell. Let’s have some fun.